Classic RPGs often present a collection of mandatory linear quests, some of them barely related to their core plot, which are meant to portray the feeling of enduring a long journey. This structure, though potentially repetitive and tiresome, helps the player connect with the characters such that story beats, even simple ones, can have a higher emotional impact.

If, however, the player doesn't buy into this structure, the piece doesn't land, or it gets abandoned, even.

The idea here is: if classic RPG content can feel tedious both through its length and when it fights player intent, and it's only important as part of a whole but not in itself; then maybe one could structure a game where only the core story points are carefully scripted and mandatory, and the rest is reduced to barebones open narration left for the player to discover and roleplay.

This piece picks a classic RPG, Tales of Phantasia, and offers an alternative structure that follows this idea, while at the same time (hopefully) conveying the same emotional content as the original game.

This is Not Tales of Phantasia.

Initially I listed everything I remembered from the original game, without looking up any references. The idea was that the collection of beats that stuck in my memory for so long were probably the most important aspects in the game, and players should be geared towards experiencing these during the game. Everything else could be presented as optional content surrounding the core plot.

There are bits of the original story one could argue are important enough (such us the whole prologue before the time travel), but I honestly could not remember most of them so I cut them out completely.

Character pronouns are weird because I decided to gender-swap them.

The original game would trigger dialogue and cutscenes at choke points the player was known to have to go through. However, we've expressed the desire to reduce those to a bare minimum here, which creates the issue of how to communicate the same amount of story content.

We'd need to ensure the dialogue is either agnostic to variables such as number of current party members, length of the journey so far, etc, or that it can programatically adjust to it. We'd also have to figure out the right time to trigger these events, with the downside of possibly misinterpreting player intent (maybe the player wasn't actually heading towards the quest objective when we started playing a related cutscene).

Instead of trying to solve that problem, we could make the AI use an abstracted, emoji-like language that responded to personality and status data.

AI party members would provide abstract responses to stimuli generated by gameplay or story content, which would give players the tools to build a cohesive narrative in their head. Even with simplified reactions, it's very easy to misiterpret player intent and reach broken states ("character A is now always angry at me and I have no idea why"), so it's probably safer to make these reactions immediate and consumable, rather than persistent throughout the game.

Content could then be divided into very few mandatory story beats with authored dialogue or even cutscenes; and recommended or optional content with bits of explicit story elements at their beginning / end (the only choke points we can ensure will exist, though we may find more oportunities to trigger more), along with supplementary, stimuli-triggered, abstracted AI dialogue.

Since most of the story is crafted through players' gameplay, it'd be not so much consumed as it'd be created. On the one hand this could help alleviate the completionist feeling of "having to consume all content" which some players face, since they'd instead be able to drive their own story. On the other, this very lack of authored pace could drive users away. 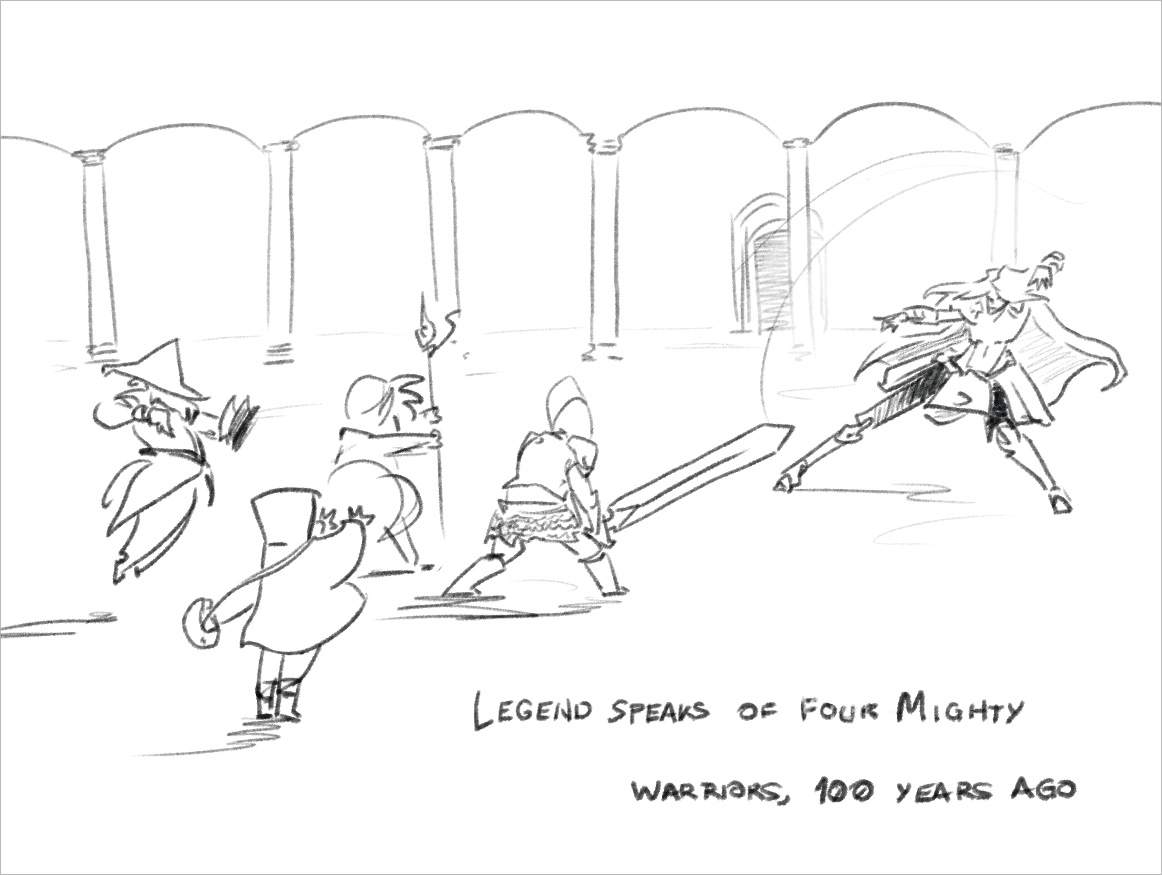 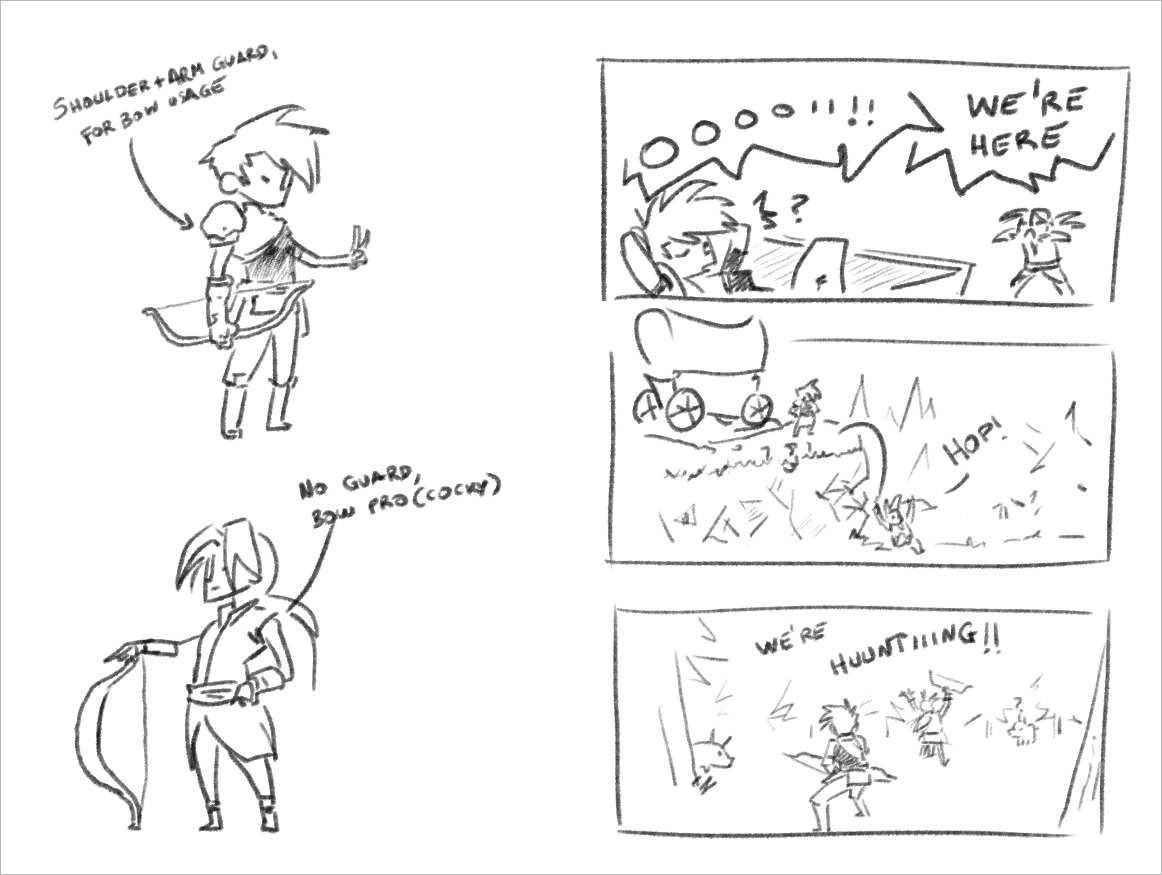 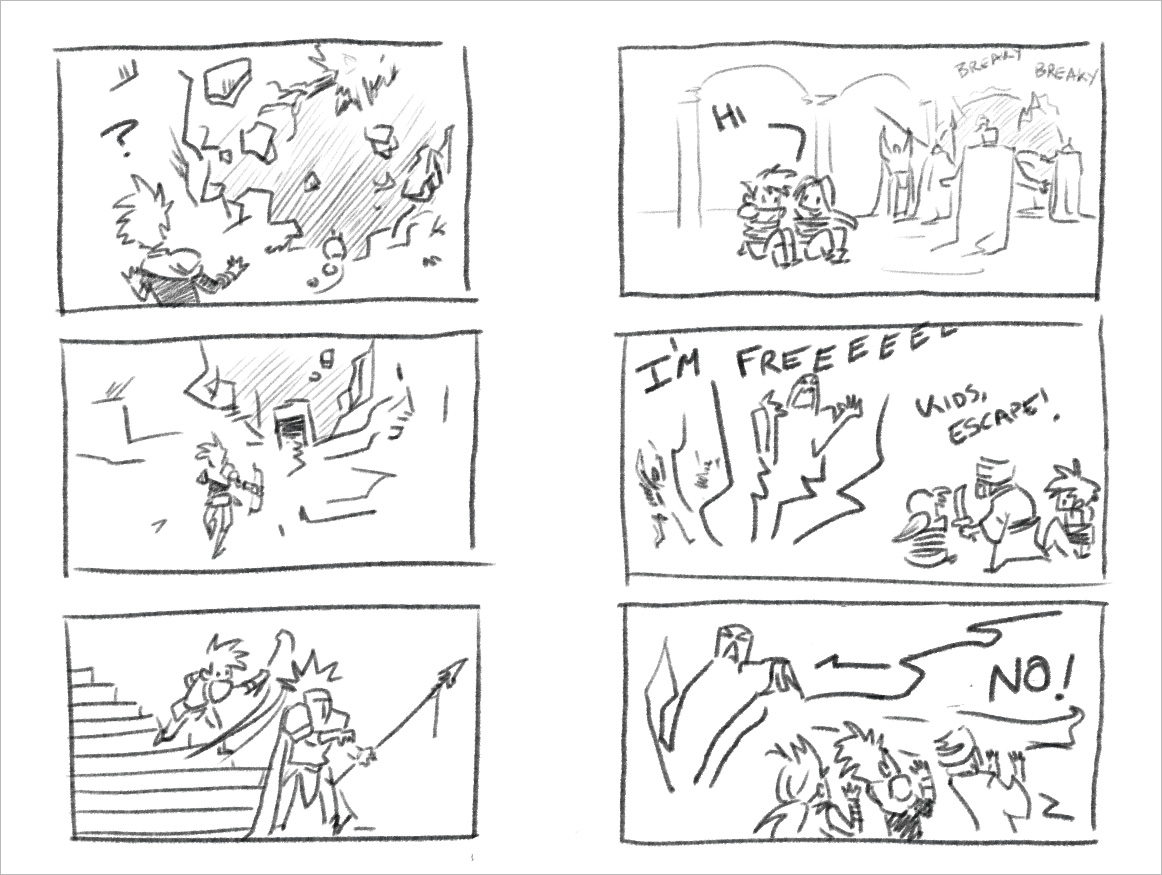 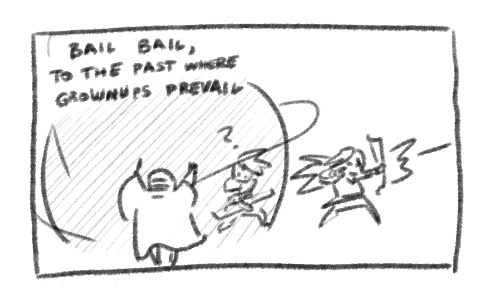 # start of main game (past): Mountain of Landing 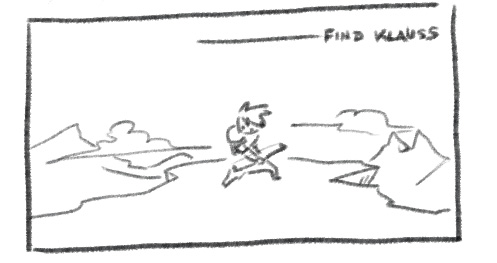 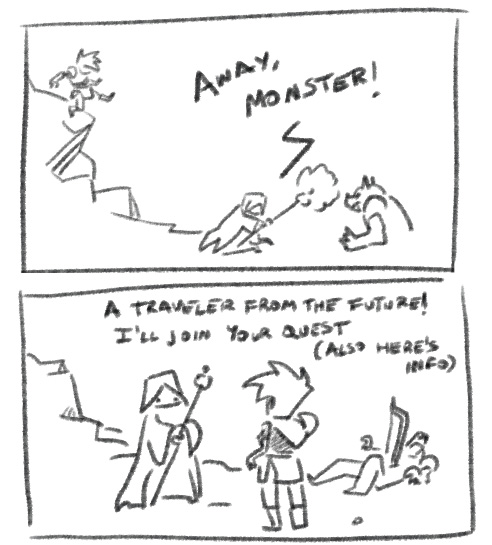 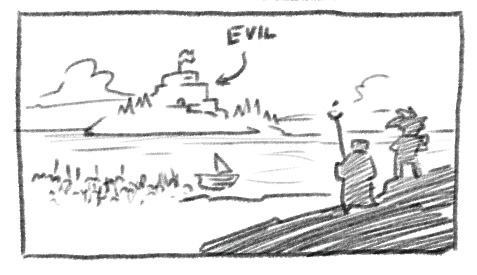 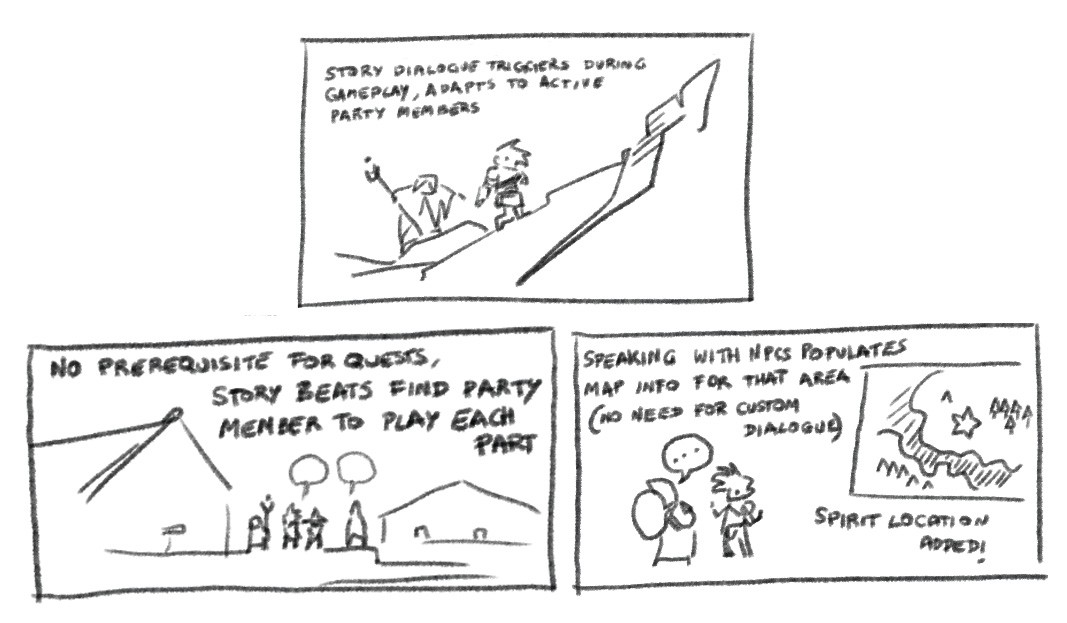 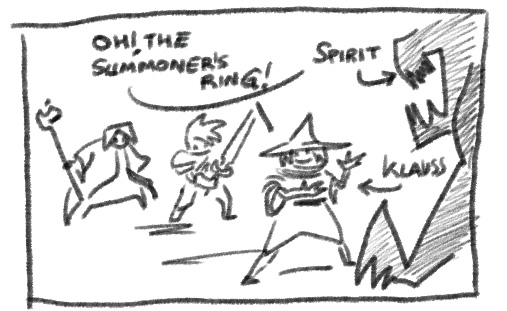 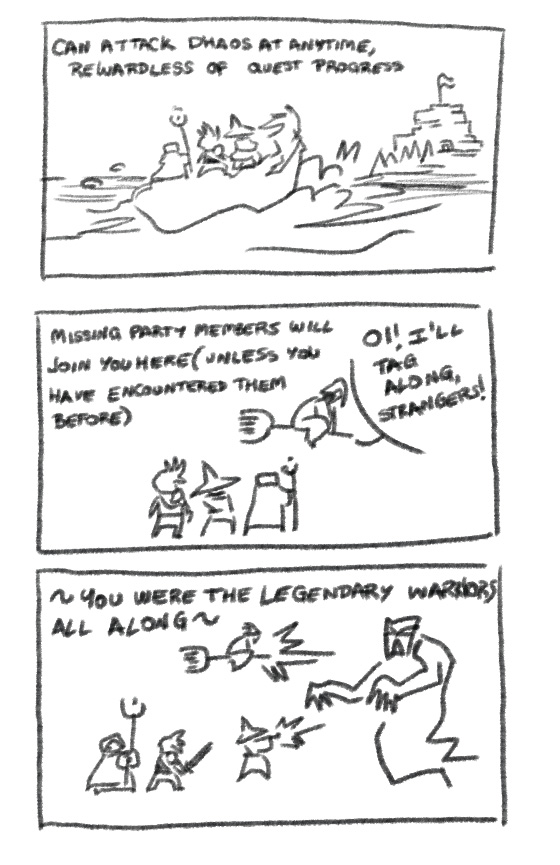 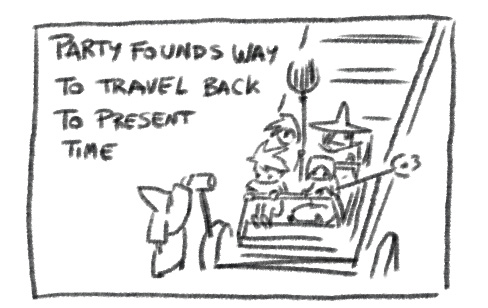 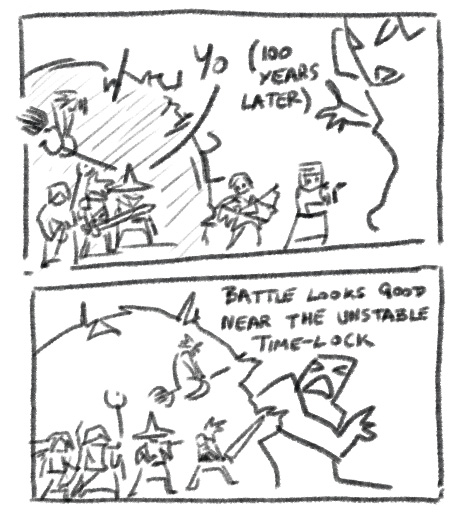 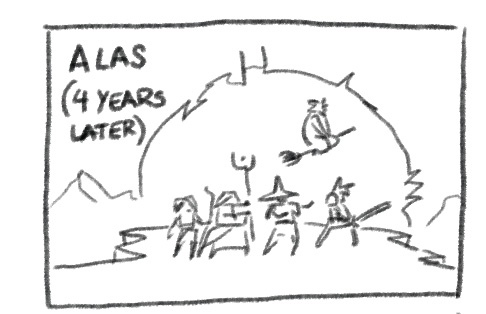 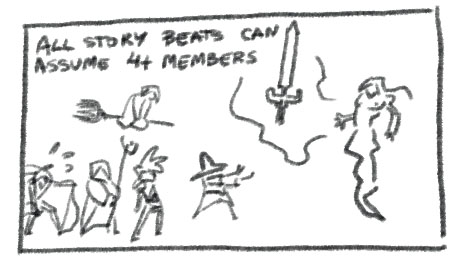 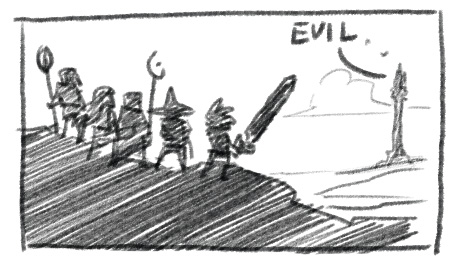